The Buffalo/Niagara International Airport in Cheektowaga NY provides many options for flights to the Niagara Falls area within the USA.

If  you are interested in flying to Niagara Falls from anywhere but the USA you will likely want to use Toronto’s Lester Pearson Airport.

There is an airport in “Niagara Falls” New York which has one carrier serving routes within the United States.

Distance to the Falls from:

To get to Niagara Falls by air most international travelers arrive in Toronto, Ontario Canada.

Buffalo/Niagara airport serves travelers from within the United States.

There are a very limited number of commercial flights directly to the Niagara Falls NY USA airport.

Please visit our home page for the most up to date Niagara Falls tourism information.

Passengers can actively improve the security process by being ready prior to going through the checkpoint. Following these steps will help everyone get through the process faster:

Be sure that when making reservations you use the exact name that is shown on the ID you'll be using during the screening process.

Passengers who present a federal or state issued photo ID containing name, date of birth, gender, expiration date and a tamper-resistant feature that is free from evidence of tampering can expect to be expedited through the travel document checking process.

Passengers should remove their government issued photo ID from wallets, plastic holders and other carrying cases and present the ID along with their boarding pass at the start of the screening process. Hold on to the boarding pass until through the magnetometer, where it may need to be shown again.

Large liquids are banned from carry-on luggage. Remember the 3-1-1 rule for liquids, gels and aerosols at the checkpoint. Click on the TSA link below for complete details.

Laptops must be taken out of their cases and placed in a separate bin for X-ray.

Removing footwear for X-ray screening is required. Wearing footwear that can be easily removed helps speed the process. Please also place your jackets and sweaters in the bin.

Whether you're visiting by plane, train, bus, or automobile we're here to help you visit and tour Niagara Falls. 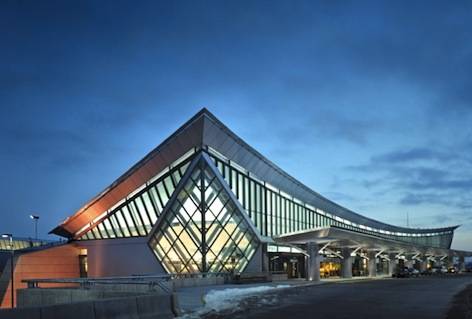 The Buffalo Niagara International Airport is located approximately 30 minutes from downtown Niagara Falls and has up to 100 nonstop flights per day serving 31 airport destinations. Each year, the airport services more than 5.2 million passengers. Major carriers to the airport include: American Airlines, Delta, Frontier, JetBlue, Southwest, United and Vacation Express by Sunwing. 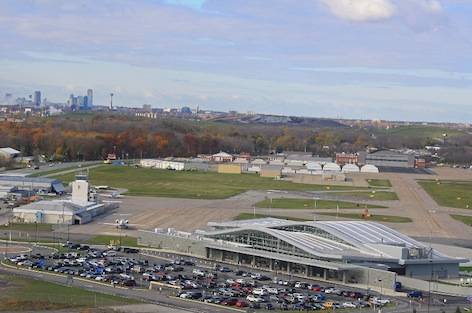 The Niagara Falls International Airport is located within Niagara Falls' city limits and features flights on low-cost carriers Spirit Airlines and Allegiant to destinations such as Ft. Lauderdale and Myrtle Beach among others.

In need of a quick weekend getaway? Spirit Airlines is here to help. We fly to over 60 destinations across the U.S. and an additional 15 international destinations. No matter where you’re traveling from Niagara Falls, get ready to save big with Spirit Airlines.

Your Spirit Airlines flight departs from Niagara Falls International Airport (IAG). Take advantage of the many dining options for a snack or sit-down meal before your flight. Free WiFi is available. A pet relief area welcomes those traveling with their furry friends.

Getting to Niagara Falls Airport

The Niagara Falls Airport is located four miles east of downtown, on the New York side. Most travelers opt for a taxi or airport shuttle to the airport, though some area hotels provide airport shuttle service for guests. Rental cars are perfect for exploring the region at your own pace.

Save on travel so you can splurge during your trip - look for top flight deals from Niagara Falls with Spirit Airlines.

Get started finding a cheap flight to Niagara Falls on Expedia by either choosing a deal on this page or entering into the search bar your travel dates, origin airport, and whether you want roundtrip or one-way airfare. You can filter for flexibility, number of stops, airline, and departure/arrival times to find the best flight for you.

We recommend using the ‘Flexible Dates’ calendar at the top of the page to see the price of plane tickets on the surrounding dates. This allows you to pick the cheapest days to fly if your trip allows flexibility and score cheap flight deals to Niagara Falls.

Be aware that choosing a non-stop flight can sometimes be more expensive while saving you time. And routes with connections may be available at a cheaper rate.

Cheap plane tickets may be available from different airlines at different times and with unique terms. It’s best to understand the details of each airline’s offer before judging its value.

For example, if you plan to check a bag or bring a carry-on, check whether the cheap airfare deal includes a baggage allowance. If not, verify whether the baggage fee is higher than the difference of other airline plane ticket deals offering free checked/carry-on baggage in exchange for a slightly higher airfare.

Additionally, your preferred frequent flyer membership programs may influence your choice of cheap airline. Expedia allows you to enter your membership numbers during checkout to earn points from your airline and Expedia Rewards—all while getting a great deal and planning all your travel in one online platform.

At Expedia, we source many flight deals from multiple providers, so you can easily find the best deals that are right for you. A great strategy for getting the best deals can be to make sure you book and travel at the optimal times. Airfare to Niagara Falls (BUF) varies throughout the year based on seasonal demand. You’ll see the lowest rates for roundtrips to BUF in October and in May for one-ways.

To change or cancel eligible flights, go to ‘My Trips’ and navigate to your itinerary. If you booked within the last 24-hours, you might be able to cancel your flight for free. Learn more about flight changes or cancellations from our customer service portal. Some plane tickets are available with no change fees, which you can filter for during your search.

Sours: https://www.expedia.com/Cheap-Flights-To-Niagara-Falls.d602721.Travel-Guide-Flights
Flying Over Niagara Falls in A small Airplane

Niagara Falls International Airport (IATA: IAG, ICAO: KIAG, FAALID: IAG) is located 4 mi (6.4 km) east of downtown Niagara Falls, in the Town of Niagara in Niagara County, New York.[1] Owned and operated by the Niagara Frontier Transportation Authority, the airport is a joint civil-military airfield and shares its runways with the Niagara Falls Air Reserve Station. A new terminal building opened in 2009. It is notable for serving vastly more Canadian passengers from over the nearby border than Americans.

During World War II, Bell Aircraft established a large manufacturing plant next to the airport, where during the war it built over 10,000 P-39 Airacobras and P-63 Kingcobras. Bell employed over 28,000 at the plant. After the war, the plant was the development site of the Bell X-1 used by Chuck Yeager to break the sound barrier in 1947.

The United States Army Air Forces assumed jurisdiction of the airport during the war, with the 3522d Army Air Force Base Unit managing the airport and coordinating use of the airfield with Bell Aircraft. The airfield was improved with macadam runways, 4000x150(N/S), 4000x150(NE/SW), 4200x300(E/W), 4000x150(NW/SE), including many taxiways and other improvements to handle large numbers of aircraft. Air Technical Service Command also operated an Aircraft modification center at the airport where new aircraft were given various updates prior to their deployment to operational bases and overseas combat theaters.

Today, the Niagara Falls Air Reserve Station is home to the Air Force Reserve Command's 914th Air Refueling Wing (914 ARW), flying the KC-135R Stratotanker. The wing is operationally gained by the Air Mobility Command (AMC). The main runway was extended to over 9,000 feet (2,743 m) in 1959 to handle larger military aircraft, and was extended again in 2003 to its current length of 9,829 feet (2,996 m). For all practical purposes, the facility is a small Air Force base.

On August 4, 2014, an Air France Boeing 747-428 flight AF356 from Paris Charles-de-Gaulle was diverted from Toronto due to the temporary closing of Toronto Pearson International Airport. Landing and take-off was on Runway 28R.[4] Niagara Falls gets a large number of Toronto's diversions due to its location and long runways.

In September 2009, a new terminal complex was completed.[10]

In the summer of 2020, due to the COVID-19 pandemicAllegiant Airlines made the decision to cut the Savannah route. This should not have come as a shock seeing as from 2019 to 2020 this route only carried about 510 passengers.

The airport is in Class D airspace and has a FAAcontrol tower.

On September 2, 2009, Niagara Falls International Airport dedicated its new two-story terminal. With 69,430-square-foot (6,450 m2), it has four gates (two jetways and two ground-loading gates), and has room for a Boeing 747 in size.[15] The exterior is designed to reflect Niagara Falls' water flow. Cost was an estimated $42.5 million, $31.5 million for the terminal and $11 million for runway apron and landside improvements.[16][17]