I’m still well behind in my 2018 Marvel Legends reviews, so I’m going to diverge from my usual format and knock out two figure reviews for the price of one today! While the Spider-Man Marvel Legends Lizard Series has been out in stores (allegedly) for a couple months now, it’s been exceedingly hard to find in a lot of areas. If you haven’t obtained the Marvel Legends Lasher and Prowler Figures yet, are they worth the hunt? Here’s my review… 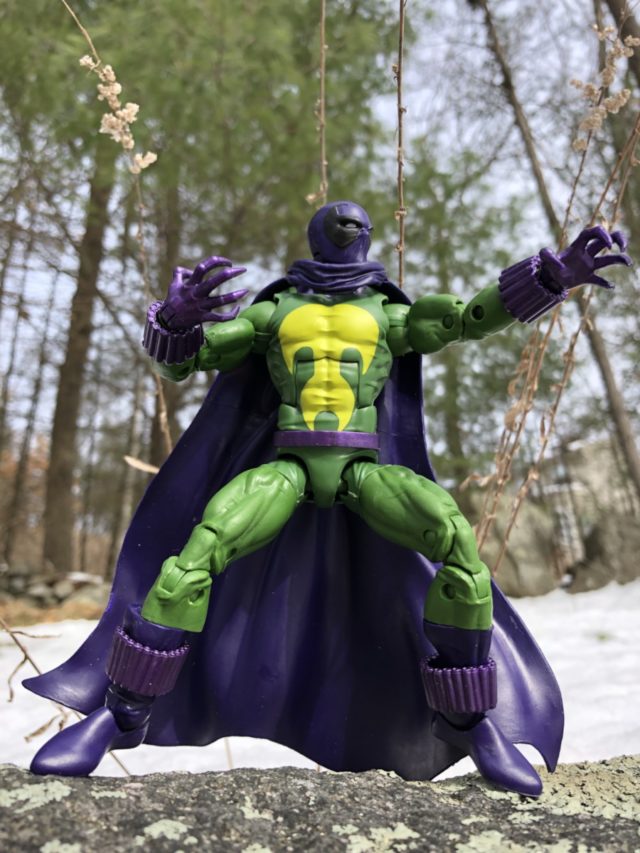 Ever since I was a kid and saw him in the 90s Spider-Man animated series, I’ve always liked the Prowler. I hunted down the comic books he appeared in, owned his Toybiz action figure, and considered myself one of the biggest fans of the C-List Spider-Man character.

I’ve been hoping Hasbro would get around to giving us a new Prowler Marvel Legends figure for a few years now, and finally he’s here. But does he meet my expectations? Well… no. 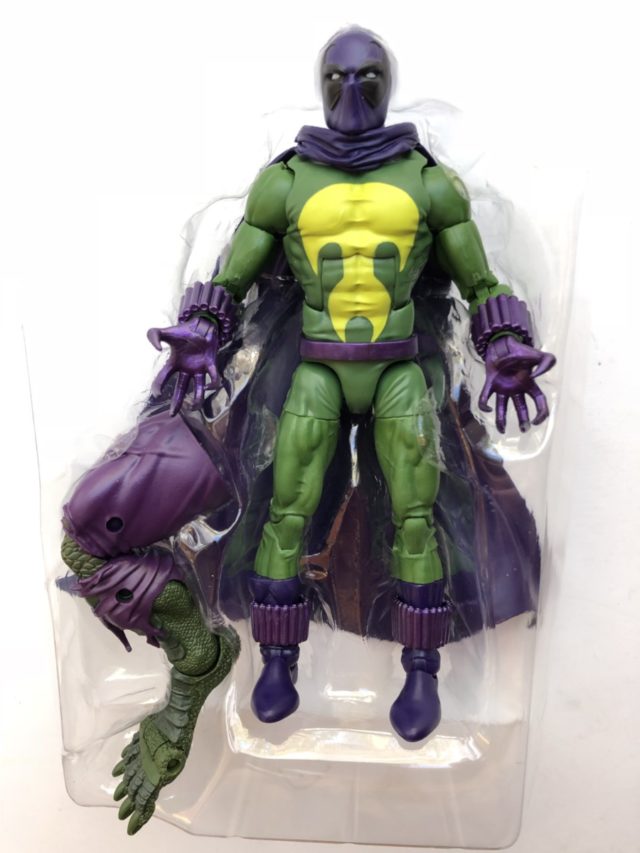 Hasbro opted for the classic look for the Prowler and not the more modern costume from his (predictably short-lived) solo comic book, which I think was definitely the right decision. 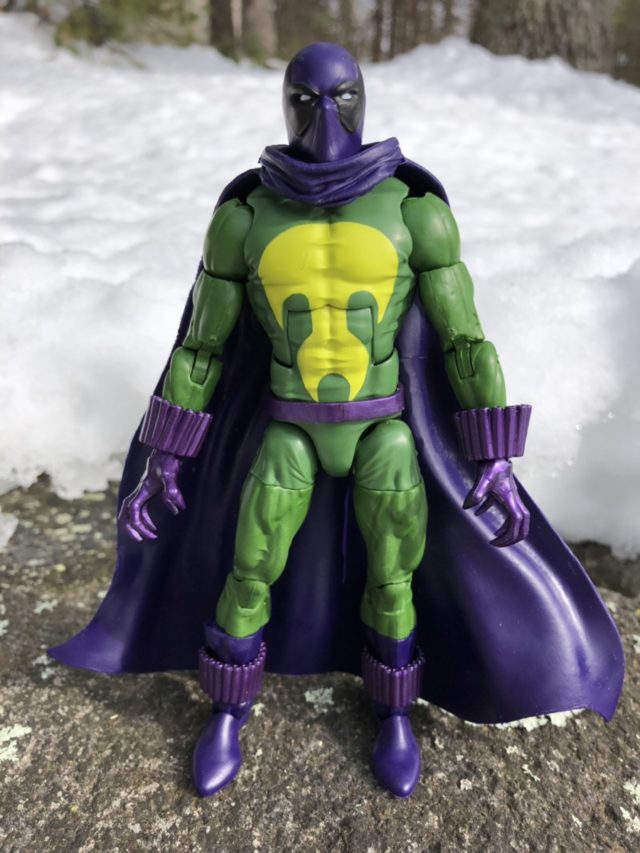 That said, they also picked a super dark purple for the costume instead of the more recognizable lavender, and I think the resulting figure is, well… ugly. To me, the colors on this figure just end up looking off. 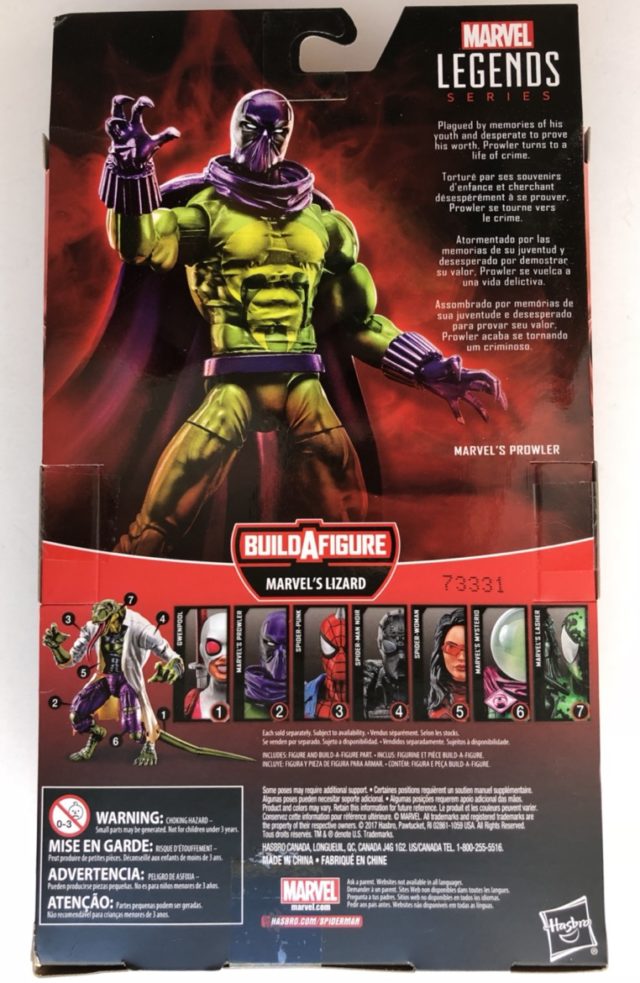 And while the character design for Prowler might look rather simple at a glance, the costume posed some real challenges for the Hasbro design team that I’m not entirely convinced they fully overcame. 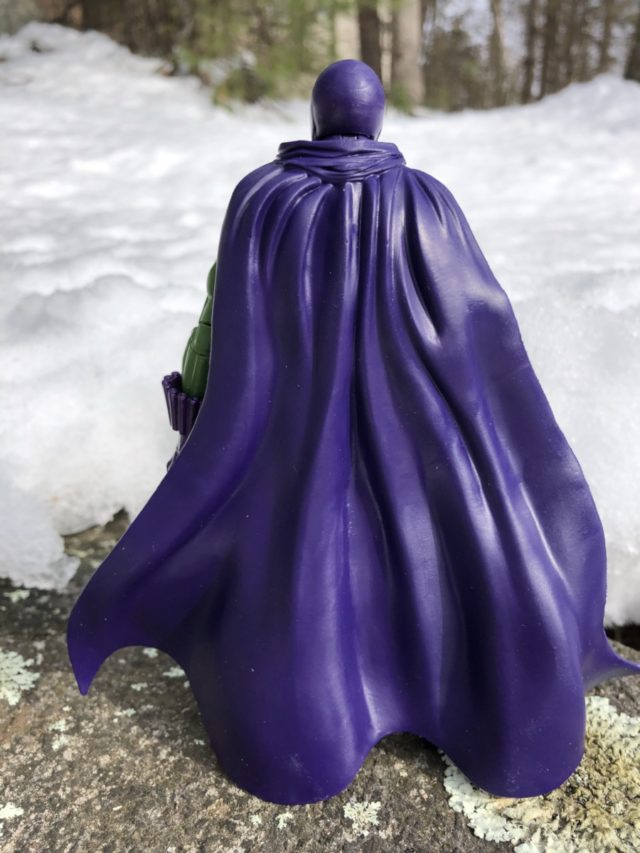 When the cape is plugged in, Prowler’s collar is floating over his chest put under his head. It looks bizarre, and the weight of being held in the air makes the peg for the cape fall out regularly. The rubbery cape also goes almost all the way to the floor, which makes getting Marvel Legends Prowler into any kind of dynamic poses a real challenge. 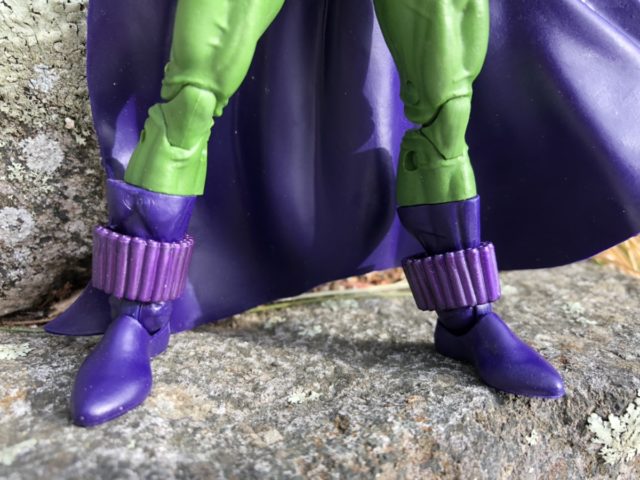 The claws for the figure look fantastic, but the bracelets and anklets both are hard to work with. The bracelets aren’t quite tight enough to hold firmly in place without flopping around, while the anklets are so tight that it’s actually a bit of a battle just to get them to the proper position at the top of Hobie’s boots to begin with. 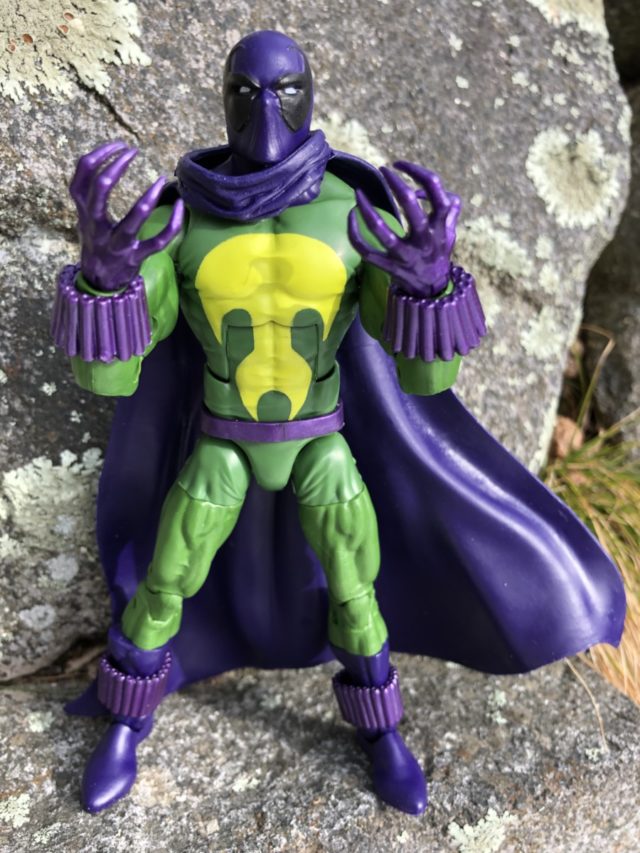 While the add-on costume bits get in the way and make this figure not all that much fun to pose, he still features the standard ML super-articulation: ab crunch; ball-hinge neck/shoulders; swivel-hinge wrists; double-hinge knees and elbows; swivel waist/thighs/boots/biceps; ball-jointed hips and hinged ankles with rockers. 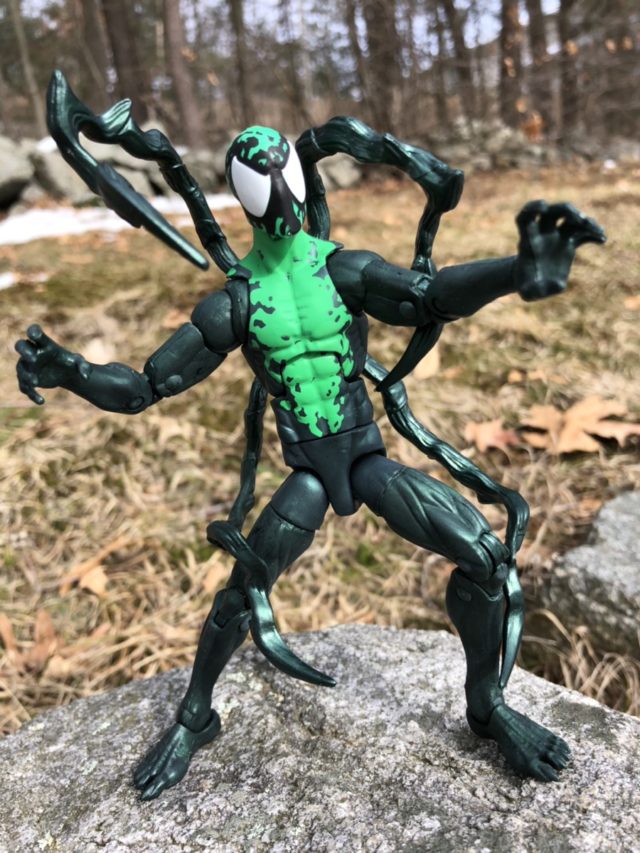 But hey, speaking of figures whose add-on bits get in the way and decrease the fun factor, now seems like the perfect time to segue into discussing Marvel Legends Lasher. Lasher was easily my favorite of the Life Foundation Symbiotes as a kiddo, but this is another figure I feel let down by. 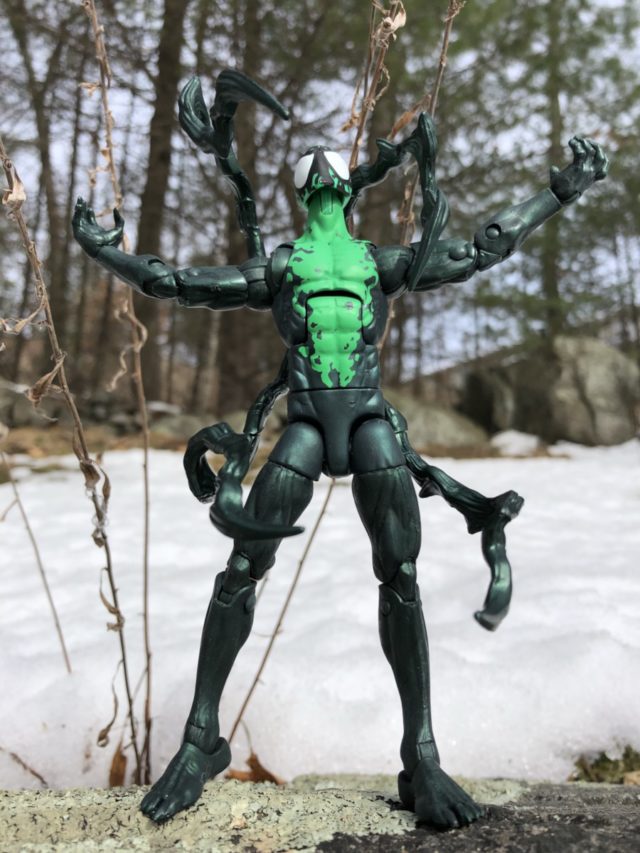 While Lasher should never be super-ripped like Venom, the Superior Venom mold Hasbro picked for this figure looks WAY too thin and emaciated to me for this character. 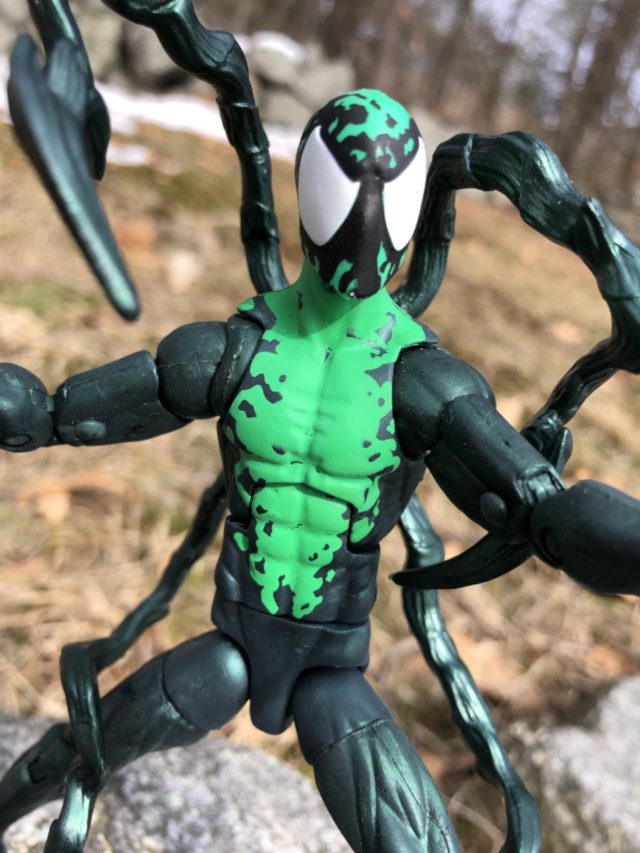 He looks off-model not only in build, but in colors as well—Toybiz nailed the comic colors for Lasher back in the day, and Hasbro’s palette just doesn’t seem as accurate. Making matters worse, the mold chosen doesn’t have any kind of texture to it at all, so Lasher’s symbiote is basically just a coat of paint and looks, well… pretty lame. 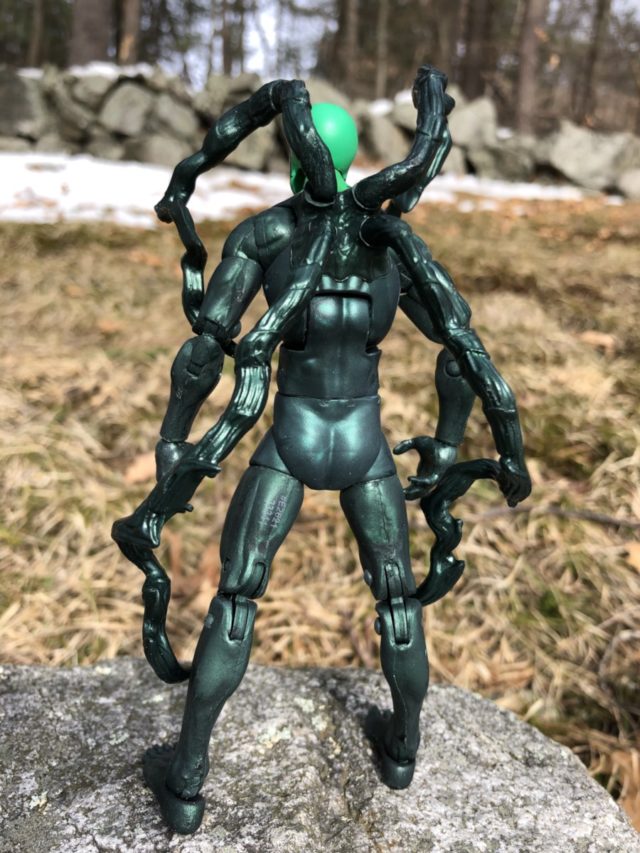 The worst thing about this figure, though, is the obnoxious plug-in tendrils that attach to his back. They’re completely unarticulated, obstruct a majority of poses you’d want to try to put Lasher into, and get knocked off constantly when trying to move him around. 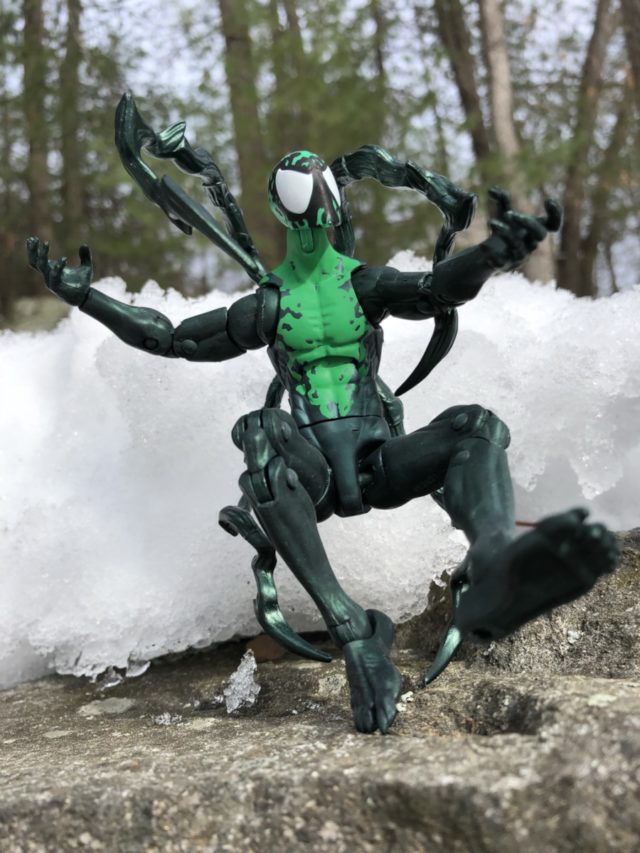 The Lasher Marvel Legends figure has all the same articulation as Prowler does, except with the awesome butterfly swivel shoulders instead of swivel boots. With some effort, you can get this figure into some neat poses—it’s definitely not much fun “playing” with him and getting him into those poses without knocking off the tendrils, though. 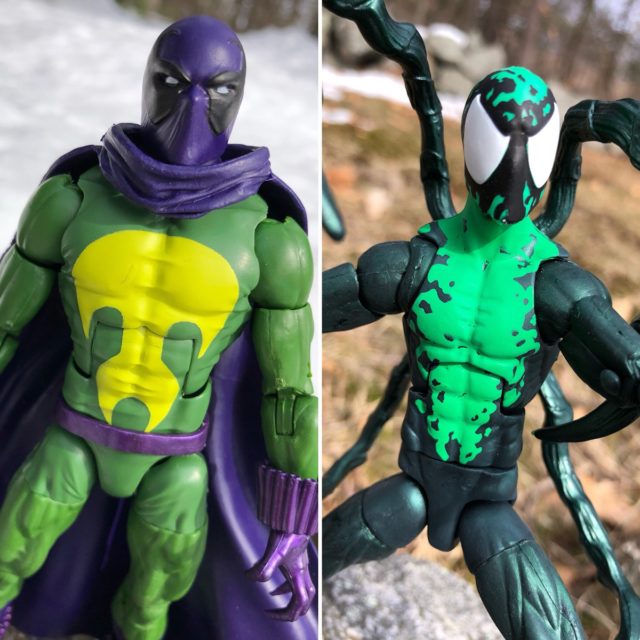 Overall:While Lasher and Prowler are both characters that I like and was looking forward to owning modern Marvel Legends 6” figures of, ultimately both figures have their drawbacks and are just pretty average.

The purple on Marvel Legends Prowler isn’t to my aesthetic taste, but far more importantly, the cape design gets in the way of posing, the anklets and bracelets are fiddly, and he’s just not all that much fun to play with. 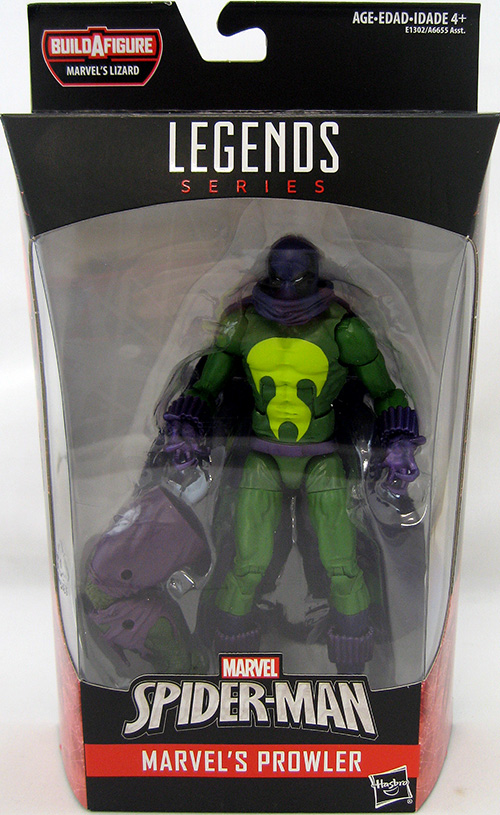 Meanwhile, the mold used for Lasher looks too skinny for the character, having zero sculpted texture for the Symbiote and just having it painted on doesn’t look quite right, and the tendrils really get in the way and interfere when trying to pose him. 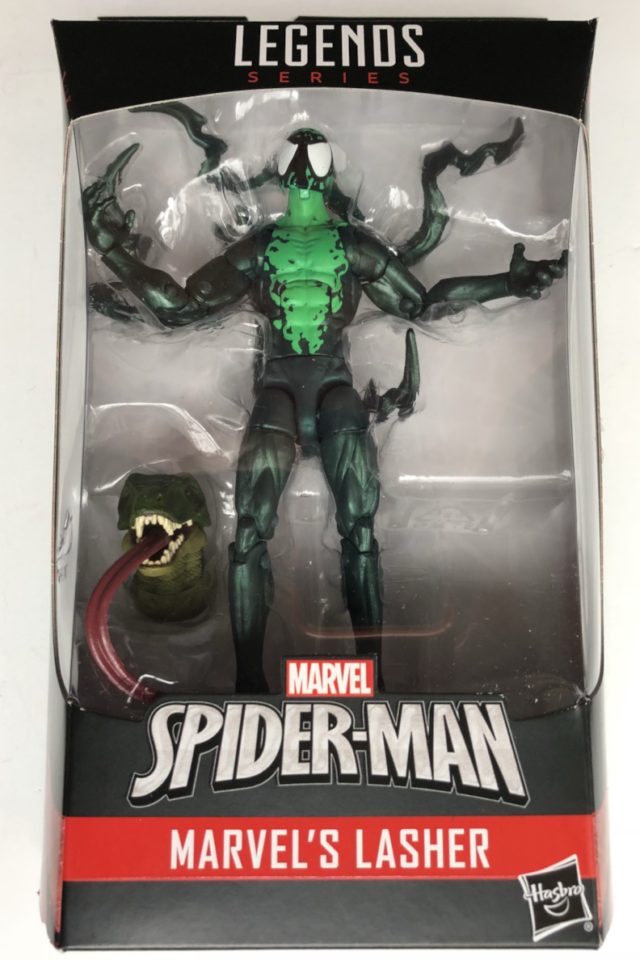 These are both characters I’m a big fan of, but in this instance, these Marvel Legends figures are simply “okay” and not the triumphs that we’ve grown to know and love from Hasbro over the past few years. These are fine pickups for fans of the characters (and those building the Lizard BAF), but could definitely be improved.

Entertainment News International (ENI) is the #1 popular culture network for adult fans all around the world.
Get the scoop on all the popular comics, games, movies, toys, and more every day!

©Entertainment News International - All images, trademarks, logos, video, brands and images used on this website are registered trademarks of their respective companies and owners. All Rights Reserved. Data has been shared for news reporting purposes only. All content sourced by fans, online websites, and or other fan community sources. Entertainment News International is not responsible for reporting errors, inaccuracies, omissions, and or other liablities related to news shared here. We do our best to keep tabs on infringements. If some of your content was shared by accident. Contact us about any infringements right away - CLICK HERE 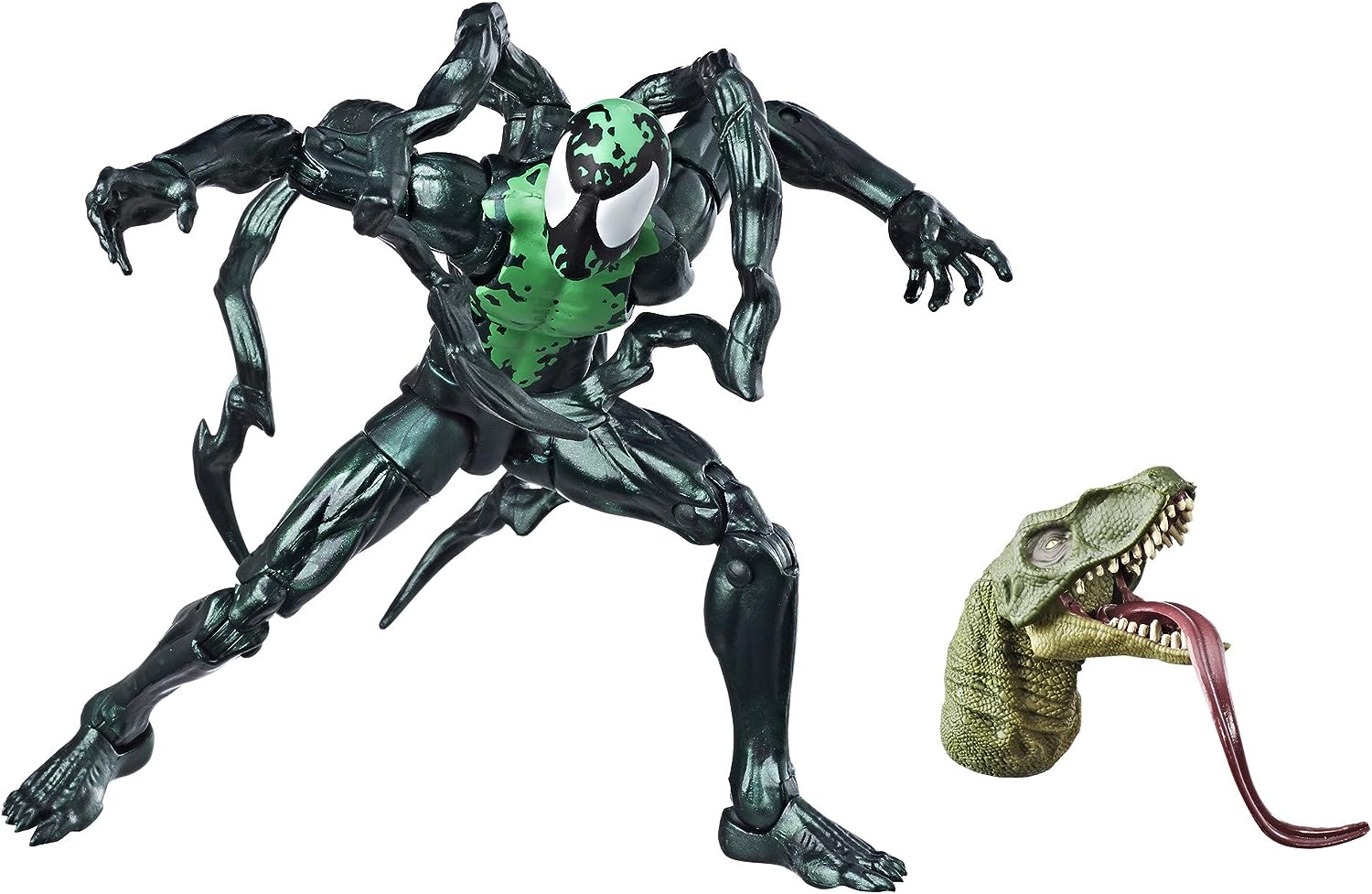 This product is not Fulfilled by Ubuy and can take minimum 10 days in delivery. We might cancel the product from the order and refund you if any issue arise with the delivery of this product.

Note: Electronic products sold in US store operate on (110-120) volts, a step-down power converter is required for the smooth device function. It is mandatory to know the wattage of the device in order to choose the appropriate power converter. Recommended power converters Buy Now.

A sinister mercenary of evil, Lasher thrives off of the power of the malevolent Venom symbiote.

Copyright 2017 MARVEL.
Hasbro and all related terms are trademarks of Hasbro.

The figure was very lose

Poorly made for price

It was very cheaply made for price I was very surprised.

Expensive. But the figures is awesome and packaging was neat

Supper cool one. My son loved it.

Awful didn't even send me the right figure came in a plastic bag didn't even get the build a figure head for lizard.

Bought as a gift. He loved it. Was in great condition

Very good. My son is loving it.