As part of NASCAR’s announcement of the 2021 NASCAR Camping World Truck Series schedule, Martinsville Speedway will host the penultimate race of the series’ season on Oct. 30, 2021.

Martinsville will host the penultimate races of the NASCAR Cup Series, NASCAR Xfinity Series, and NASCAR Camping World Truck Series seasons for the second consecutive year in 2021. On Saturday, Oct. 30, 2021, Martinsville will host a doubleheader with the NASCAR Camping World Truck Series Playoff race and the Draft Top 250 NASCAR Xfinity Series Playoff race. The NASCAR Cup Series’ Championship 4 will be set in the Xfinity 500 on Sunday, Oct. 31, 2021. The NASCAR Championship in all three series will be held the following week at Phoenix Raceway.

Racing Virginia will be active in the month of April as the Commonwealth will host two Cup Series races in the same month for the first time since the April 2017 with Richmond Raceway hosting a Cup race a week after Martinsville on April 18, 2021. Martinsville and Richmond have hosted back-to-back race weekends four times, with the last time being in the spring of 1967. The first time was in the spring of 1955.

The ValleyStar Credit Union 300, the nation’s biggest, richest and most prestigious NASCAR Late Model Stock Car race, will return for an evening of intense competition at Martinsville in 2021. The race date will be announced in the near future.

Stay connected to Martinsville Speedway on Facebook, Instagram, Twitterand by downloading the Martinsville mobile app for Apple or Android.

Martinsville Speedway, otherwise known as the paper clip, is the shortest track in the NASCAR Cup Series. This unique track offers a combination of long straightaways and narrow turns which makes for some exciting racing.

This track is easy to maneuver and has been voted as the “best track to view all the action!” The seating is comfortable too, with high-rise aluminum chair backs.

We stay in Greensboro, NC, which is only 45 minutes away from Martinsville Speedway. Our hotel rooms are at the Embassy Suites – Airport. We love the two-room suites, cooked-to-order-breakfasts, and airport shuttle.

If you are flying in, the Piedmont Triad International Airport (GSO) is just three minutes from the Embassy Suites hotel, and they would be happy to send the shuttle to pick you up.

Weather during the October race weekend in Martinsville is usually cool with a high in the 60s and lows in the 40s.”

The paper clip design combined with the short length of the track activates the scene for some of the most heated and close racing you will find in the NASCAR Cup series. Tempers often flare but the one who can hold on the longest to cross the finish line will take home the coveted Grandfather Clock trophy.

There is another iconic treat that this Speedway has to offer, the famous Martinsville Speedway red hot dog! You can’t leave without one (or two).

I would like to say thanks for the great time we had in Martinsville. Everything was perfect! We are joining you in Phoenix next.

I just want to say Thank You so much to the whole RaceAway team.  We had such an Awesome time in Martinsville.  Our seats were Awesome and the Embassy Suites Hotel was really nice.  Rick did a great job getting us to the track and back to the hotel. We are already talking about going to the Richmond Race next year with you guys.  Again, I just wanted to say thanks for putting together a great package for us.

Discover all the exciting upcoming events held at Martinsville Speedway.

Come see the best that NASCAR has to offer battle it out on this historic half-mile track. Start of race time is subject to change.

Motorsport track in the United States

Martinsville Speedway is an International Speedway Corporation-owned NASCAR stock car racing short track in Henry County, Ridgeway, Virginia, just south of Martinsville. At 0.526 miles (847 m) in length, it is the shortest track in the NASCAR Cup Series. The track was also one of the first paved oval tracks in NASCAR, being built in 1947 by partners H. Clay Earles, Henry Lawrence and Sam Rice.[2] It is also the only race track that has been on the NASCAR circuit from its beginning in 1948. Along with this, Martinsville is the only NASCAR oval track on the NASCAR track circuit to have asphalt surfaces on the straightaways, then concrete to cover the turns.

The track is often referred to as paper clip-shaped and is banked only 12° in the turns. The combination of long straightaways and flat, narrow turns makes hard braking going into turns and smooth acceleration exiting turns a must. The track was paved in 1955 and in 1956 it hosted its first 500-lap event. By the 1970s, a combination of high-tractionslick tires and high speed was putting excessive wear on the asphalt surface. In 1976 the turns were repaved with concrete (a rare concept in the 1970s).[3] By 2004, the then 28-year-old concrete had shown significant wear. On April 18, 2004 a large chunk of concrete became dislodged from the track's surface and caused severe damage to the body of Jeff Gordon's car. In reaction to this, the track was fully repaved with new concrete and asphalt.[4]

Until 1999, Martinsville was notorious for having two pit roads. The backstretch pit road was generally avoided because if a team had to pit there during a caution, any car pitting on the front stretch had the advantage of pitting first and not having to adhere to pace car speed upon exiting their pit road. This was rectified when pit road was reconfigured to extend from the entrance of turn 3 to the exit of turn 2.[5] This move allowed for a garage to be built inside the track, and leaves Bristol as the only active NASCAR track with two pit roads.

The first NASCAR sanctioned event was held on July 4, 1948. In 1951, only four cars were running at the finish, the fewest of any race held at the speedway. In 1960, Richard Petty became the youngest winner at Martinsville, at 22 years, 283 days; to date[when?] Petty has the most wins (15). In 1991, Harry Gant became the oldest winner at 51 years, 255 days. It was Gant's fourth win in a row, earning him the nickname Mr. September.[citation needed]

Ownership of the track was a joint venture of brothers Jim and Bill France, Jr., and H. Clay Earles, the majority owner, along with daughters Dorothy Campbell and Mary Weatherford, and Dorothy Campbell's children, Sarah Fain and Clay Campbell. In 2004, the track was sold exclusively to the France family for over $200 million as a result of an estate sale following the death of Weatherford. 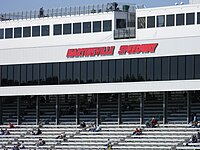 The tower above the finish line at the speedway.

Plans had existed to add an additional 20,000 seats along the backstretch, boosting capacity to over 85,000 seats. In 2005–2006 the Norfolk Southern Railway behind the track was moved 200 feet to make way for the added seats, but nothing more has been officially mentioned regarding this by track management since the sale of the track to ISC.[citation needed]

From 1982 until 1994, and again in 2006, the speedway hosted Busch Series events. This occurred first with 200- and 150-lap features (200 laps for the two races with Whelen Modifieds, 150 laps with the September Winston/Nextel Cup race), then 300 laps from 1992 until 1994 as part of a Late Model/Busch Series doubleheader, and 250 laps in the one-off in 2006. The venue was dropped from the Busch Series schedule for 2007 and a race at Circuit Gilles Villeneuve in Montreal was run on the open date.

Winners of the NASCAR Cup Series, Truck Series, and Whelen Modified events receive a longcase clock as a trophy, a nod to Martinsville's famous furniture industry. This tradition started in 1964, when Earles decided he wanted to present a trophy that would reflect the Martinsville area. He chose clocks made by a local company, Ridgeway Clocks (now a subsidiary of Michigan-based Howard Miller). The clocks presented as trophies are currently (2009) valued at around $10,000.[6] 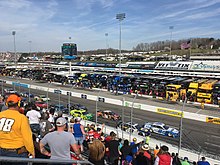 After multiple late model races were forced to count caution laps in later segments in order to beat sunset, and the 2015 fall Cup race ended at sunset, the track announced on October 12, 2016, in a news conference with Campbell and Dale Earnhardt Jr., that the track would be adding a $5 million LED lighting package. Campbell also explained that Martinsville Speedway would be the first sports arena with an all-LED lighting package. Campbell said that the track did not then have plans in place for nighttime races, with its premier series dates in 2017 already locked in to start at 2 p.m. ET (in April) and 1 p.m. ET (October). But Campbell indicated that the $5 million initiative should provide flexibility in case of inclement weather.[7] The project was completed in early February 2017 with testing of the lights in certain sections, then fully lighting the track in mid-February. It was also announced that the 300-lap NASCAR late model race will be the first NASCAR race to run in prime-time with the new lighting system in early October 2017.

Following a directive by some tracks NASCAR announced in late February to early March 2017, Martinsville was one of three races during the second half of the season (and the only one in the playoff) to experiment with a compressed two-day schedule featuring Saturday practice and Sunday afternoon qualifying, with the race starting between 90 minutes to two hours after the conclusion of knockout qualifying. The playoff race will now finish under the lights, as qualifying will move to 12:10 p.m., and after the session (which typically lasts an hour), the race will start around 3:00 p.m. (typically this would mean the race starts between 15 and 25 minutes after the hour), where with sunset being around 6:25 p.m., meaning the final laps will be run at night.[8] The experiment was not repeated in 2018, but the start time for the 2018 race was set for 2:30 PM, meaning the conclusion of the race will be at dusk around 6 PM.

On April 3, 2019, NASCAR announced significant changes to the Martinsville schedule including a return to the track for the NASCAR Xfinity Series in late October 2020, the spring race being moved to Mother's Day weekend under the lights, the NASCAR Whelen Modified Tour returning for the MaxPro Window Films 200 as part of the Mothers Day weekend event on a Friday night, and the NASCAR Truck Series racing only once at the track on a Friday night in late October.

Why did zillow stock drop