To start the graphical desktop from within the command line terminal, type “startx”.

Frequency of the ARM CPU in MHz.

Frequency of the GPU processor core in MHz, influences CPU performance because it drives the L2 cache and memory bus; the L2 cache benefits only Pi Zero/Pi Zero W/ Pi 1, there is a small benefit for SDRAM on Pi 2/Pi 3. See section below for use on the Pi 4.

Frequency of the hardware video block in MHz; individual override of the setting

Frequency of the image sensor pipeline block in MHz; individual override of the setting

Frequency of the 3D block in MHz; individual override of the setting

Frequency of the High Efficiency Video Codec block in MHz; individual override of the setting. Pi 4 only.

Frequency of the SDRAM in MHz. SDRAM overclocking on Pi 4B is not currently supported

CPU/GPU core upper voltage limit. The value should be in the range [,8] which equates to the range [V,V] ([,V] on RPi 1) with V steps. In other words, specifying will give V (V on RPi 1) as the maximum CPU/GPU core voltage, and specifying 8 will allow up to V (V on RPi 1). For defaults see table below. Values above 6 are only allowed when is specified: this sets the warranty bit if > is also set.

Forces turbo mode frequencies even when the ARM cores are not busy. Enabling this may set the warranty bit if is also set.

Enables turbo mode from boot for the given value in seconds, or until cpufreq sets a frequency. The maximum value is .

Minimum value of used for dynamic frequency clocking. Note that reducing this value below the default does not result in any significant power savings and is not currently supported.

Minimum value of used for dynamic frequency clocking. The value should be in the range [,8] which equates to the range [V,V] with V steps. In other words, specifying will give V as the CPU/GPU core idle voltage, and specifying 8 will give a minimum of V.

Overheat protection. This sets the clocks and voltages to default when the SoC reaches this value in degree Celsius. Values over 85 are clamped to

3A+/3B+ only. CPU speed throttle control. This sets the temperature at which the CPU clock speed throttling system activates. At this temperature, the clock speed is reduced from MHz to MHz. Defaults to , can be raised to a maximum of , but this may cause instability.

By default, Raspbian will boot into the CLI (command line) mode. You can change the default boot behaviour by selecting the Enable Boot to Desktop/Scratch option in raspi-config: 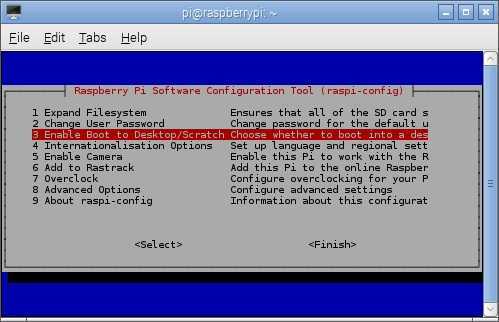 You can choose between three boot options:

Choose your preferred boot option and select Ok to save the changes: 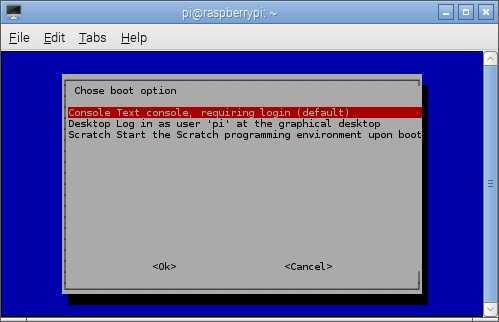 A DT overlay comprises a number of fragments, each of which targets one node and its subnodes. Although the concept sounds simple enough, the syntax seems rather strange at first:

The string identifies this as being for BCM, which is the base architecture for the Raspberry Pi SoCs; if the overlay makes use of features of a Pi 4 then is the correct value to use, otherwise can be used for all Pi overlays. Then comes the first (and in this case only) fragment. Fragments should be numbered sequentially from zero. Failure to adhere to this may cause some or all of your fragments to be missed.

Each fragment consists of two parts: a property, identifying the node to apply the overlay to; and the itself, the body of which is added to the target node. The example above can be interpreted as if it were written like this:

(In fact, with a sufficiently new version of you can write it exactly like that and get identical output, but some homegrown tools don’t understand this format yet so any overlay that you might want to be included in the standard Raspberry Pi OS kernel should be written in the old format for now).

The effect of merging that overlay with a standard Raspberry Pi base Device Tree (e.g. ), provided the overlay is loaded afterwards, would be to enable the I2S interface by changing its status to . But if you try to compile this overlay using:

This shouldn’t be too unexpected, since there is no reference to the base or file to allow the compiler to find the label.

Trying again, this time using the original example and adding the option to allow unresolved references (and to remove some clutter):

If returns an error about the third line, it doesn’t have the extensions required for overlay work. Run and try again - this time, compilation should complete successfully. Note that a suitable compiler is also available in the kernel tree as , built when the make target is used:

It is interesting to dump the contents of the DTB file to see what the compiler has generated:

After the verbose description of the file structure there is our fragment. But look carefully - where we wrote it now says , a clue that something strange has happened (older versions of dtc might say instead). The compiler has also added a property containing a unique (to this overlay) small integer to indicate that the node has a label, and replaced all references to the label with the same small integer.

After the fragment there are three new nodes:

Back in section it says that "the original labels do not appear in the compiled output", but this isn’t true when using the switch. Instead, every label results in a property in the node, mapping a label to a path, exactly like the node. In fact, the mechanism is so similar that when resolving symbols, the Raspberry Pi loader will search the "aliases" node in the absence of a node. This was useful at one time because providing sufficient aliases allowed very old versions of to be used to build the base DTB files, but fortunately that is ancient history now.

To avoid the need for lots of Device Tree overlays, and to reduce the need for users of peripherals to modify DTS files, the Raspberry Pi loader supports a new feature - Device Tree parameters. This permits small changes to the DT using named parameters, similar to the way kernel modules receive parameters from and the kernel command line. Parameters can be exposed by the base DTBs and by overlays, including HAT overlays.

Parameters are defined in the DTS by adding an node to the root. It contains properties whose names are the chosen parameter names, and whose values are a sequence comprising a phandle (reference to a label) for the target node, and a string indicating the target property; string, integer (cell) and boolean properties are supported.

where and are replaced by suitable values. String parameters can cause their target properties to grow, shrink, or be created.

Note that properties called are treated specially; non-zero/true/yes/on values are converted to the string , while zero/false/no/off becomes .

where , and are replaced by suitable values; the offset is specified in bytes relative to the start of the property (in decimal by default), and the preceding separator dictates the size of the parameter. In a change from earlier implementations, integer parameters may refer to non-existent properties or to offsets beyond the end of an existing property.

Device Tree encodes boolean values as zero-length properties; if present then the property is true, otherwise it is false. They are defined like this:

Note that a property is assigned the value by not defining it. Boolean parameters are declared like this:

where and are replaced by suitable values.

Inverted booleans invert the input value before applying it in the same was as a regular boolean; they are declared similarly, but use to indicate the inversion:

Boolean parameters can cause properties to be created or deleted, but they can’t delete a property that already exists in the base DTB.

Byte string properties are arbitrary sequences of bytes, e.g. MAC addresses. They accept strings of hexadecimal bytes, with or without colons between the bytes.

One of the biggest changes in the new release of Raspbian is that by default it automatically loads the desktop environment. There are good reasons for this but it might not suit all users. Luckily the developers have given us something in return that makes this a welcome change for me.