The Tilton School offers a structured, therapeutic, and supportive educational program for students in grades K -12 that is certified by the New York State Educational Department (NYSED). Our collaborative educational program is designed to meet the needs of students with disabilities, offering small class sizes for students to receive more individualized and differentiated instruction as well as meaningful learning experiences to ensure that all students reach their potential.

The new Student Center at Tilton School in New Hampshire is designed to infill the space between the existing Knowles dormitory, a campus icon, and Beaumont dining hall. It will include a café, lounge space, Design Thinking and Maker Spaces, art gallery, student mailboxes, and the campus store. It will also provide direct access to the Health Center and a refurbished bowling alley on the lower level of the dormitory. The Center features a dynamic, double height atrium space with abundant daylight from the skylights above, in stark contrast with the historic red brick buildings on either side.

The Student Center will have direct access from the academic quad to the north and the residential quadrangles to the south, making it convenient to access between classes and encouraging frequent use by all. The Center will create new gathering spaces for the campus community and re-energizing the 19thcentury historic buildings with innovative new program spaces for 21st century students.

This project is the continuation of the masterplan for the Tilton School by SA that includes the new Academic Building and Residence Hall.

Faculty could use improvement

A high end boarding prep school with the focus on the students.

Tilton School strives to create a family-type community with faculty, staff, and students. Teachers are expected to not only teach their subjects, but to advise, do dorm duty, weekend duty, coach a team or run an activity for two seasons.

Administration works hard to be inclusive, listen to suggestions, ideas, and expects collaboration between all.

Students come first (which as it should be). Everything that Tilton does or promotes is with the student body in mind.

If you like to be fully immersed in your job and community, a boarding prep school is for you.

None in Tilton, NH

Every day life was going to school then to practice. I learned to balance school work and basketball in my time there to prep me for college.

What would you say about your employer?

What's being discussed at Tilton School?

Tilton School is an independent, coeducational, college-preparatory school in Tilton, New Hampshire, serving students from 9th to 12th grade and postgraduate students.[1] Founded in 1845, Tilton's student body in the 2017–18 academic year consisted of 51 day students and 192 boarding students from 20 states and 16 countries.[citation needed]

Tilton School, a boarding school in New Hampshire, was founded in 1845 by a group of local leaders and members of the Methodist Episcopal Church. Their goal was to promote literary and scientific knowledge among the youth.

The school was originally named the New Hampshire Conference Seminary of the Methodist Episcopal Church and was located in the town of Northfield. In the first year of the school, the seminary's enrollment consisted of 130 students, (74 males, 56 females). Most students were from neighboring towns, but some traveled from as far as Vermont and Boston to attend the new Methodist school.[2] After a number of setbacks, including a fire that destroyed the first school building, the school moved across the Winnipesaukee River to its current location in Tilton.

Like many town academies in New England, Tilton School was a coeducational college preparatory boarding school with students from all over the world. It also served as the public high school for the towns of Northfield, Tilton and Sanbornton until 1939. During this time, students were able to choose a college preparatory or a general course of study. In addition to granting high school degrees, Tilton School awarded a number of other degrees, including college diplomas when the seminary included a women's college from 1852 to 1903. Tilton School also functioned as a junior college which awarded men their Associate Degree from 1936 until 1958. Tilton School had a lower and a middle school at different times in its early history.

The biggest change in the school's history occurred in 1939: a local school district formed, and Tilton School no longer served as the towns' high school. Tilton also stopped accepting female students at this time. Tilton School was then an all-boys preparatory boarding school until 1970. During this period, the school underwent major changes, including the addition of a new gymnasium, library, chapel, dormitory, and the purchase of 49 acres (20 ha) of land adjacent to campus.

Tilton School's return to its coeducational roots in 1970 led to more changes. In subsequent years, two girls' dorms (Moore Hall and Maloney Hall) were built, and more academic and athletic facilities were added to campus.

In 2013, Chris Burch, Class of 1972, announced at an all-school meeting that he would be donating $1.3 million for the construction of an artificial turf field on the Hill. This gift is the largest single donation in the school's history. Before the construction of Burch Field, all outdoor sports competitions were held at the Charles E. Tilton fields in Northfield.[3] The construction of Burch Field was completed in 2014 and dedicated on October 4 of that year. It is the first playing field contiguous to campus and the first in a series of campus developments known as "The Burch Initiative".[4]

At Tilton classes are held Monday through Saturday, with half-days on Wednesday and Saturday; the afternoons are reserved for athletics and club activities. Tilton has a student-to-teacher ratio of 5:1 and an average class size of 11 students.[5]

Tilton School has adopted the principles of the Understanding by Design philosophy which is a framework for designing curriculum, performance assessments, and classroom instruction.

Tilton School competes in the Lakes Region League, which consists of seven boarding schools in New England that compete athletically and academically. Tilton is also a member of the New England Preparatory School Athletic Council (NEPSAC), as well as the Evergreen League[6] for football. 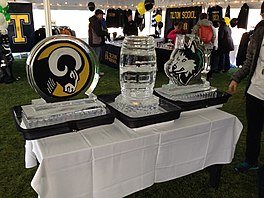 In 2008 Tilton and New Hampton School resumed a long-standing rivalry known as the Powder Keg. The competition between the two schools dates back to 1895 and is among the oldest rivalries in prep school athletics. Tilton has now lost the Powder Keg for eight straight years, with the Rams last win coming in 2011.[7] Other traditional athletic opponents include Phillips Exeter Academy, St. Paul's School, St. Mark's School, Kents Hill School, Cushing Academy, and other prep and boarding schools from across the northeast.

Over 4,300 hours of community service are completed yearly at Tilton School through its community service program. Tilton students often work closely with the New Hampshire Veterans Home in Tilton, as it is near the campus.[8][9] Every April, there is an All School Community Service Day in which advisory groups spend their day in the local community helping local residents and businesses complete their spring cleaning. Each year, a group of students travel to the Dominican Republic on their spring break in March to work with the Batey Foundation and help build community centers in impoverished areas.[10]

Skinner Tower, constructed in 2007 and designed by Scott Simons Architects, is located just west of Plimpton Hall and connects to that building. Skinner Tower was named after Carlton Skinner, the first civilian governor of Guam and one of Tilton's most distinguished alumni. It is a 38,000-square-foot (3,500 m2), wireless building that is four stories high. The atrium of the tower is used as a common space for students during free periods, as an art gallery, and sometimes as a dance floor for school socials. Skinner Tower is home to the Davis Lecture Hall, a 100-seat, SAT-certified lecture hall which is used as a classroom and venue for speakers and presentations. The first floor comprises a biology laboratory (complete with two-story greenhouse), a chemistry laboratory, and the 9th grade FIRST Program seminar room with a connecting outdoor classroom space. The second floor houses the physics laboratory, math classrooms, and integrated math/science faculty work spaces, which enhance cross-discipline collaboration, as well as the Head of School and Assistant Head of School offices. The third floor has the world languages classrooms and language laboratory and resource rooms, as well as the Center for Academic Achievement, which encompasses 10 one-on-one tutorial rooms, computer lab and common space.

Maloney Hall, also constructed in 2007, occupies 15,000 square feet (1,400 m2) and houses 20 senior girls, as well as three faculty apartments. There is a recreation room and two-story common room with a fireplace and a kitchenette, as well as laundry and storage facilities. Double rooms all share a bathroom, and proctors' rooms have a private bathroom, the top-floor private bathroom with a skylight as well. The new dormitory marks a shift in housing toward smaller, family-style living.

Beaumont Hall has two functions. The upper floors of Beaumont Dormitory are the main residential rooms for 9th-grade boys. The ground floor houses the school's main dining room. Beaumont is attached to Knowles Hall. It was built in 1909, when the current dining room replaced a smaller, wooden structure.

Tilton Hall was originally built by Charles E. Tilton in 1861. Tilton School purchased the building 101 years later. Tilton Hall, or "the Mansion", currently houses the Lucian Hunt Library. In 1980, the attached carriage house was renovated to house the Helene Grant Daly Art Center. It is listed on the National Register of Historic Places. 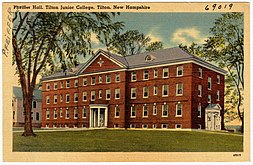 Pfeiffer Hall, constructed in 1938 and 1939, presently serves as a dormitory for 12th-grade boys.

Moore Hall, constructed in 1988, serves as a dormitory for 11th grade and post-graduate girls.

Hamilton Hall is home to Tilton's theater and music departments, and was originally the school's gymnasium and recreation center before the Memorial Athletic and Recreational Center was built.

The Fred Andrew Smart Chapel was transported in 1965 to Tilton's campus from its original home in Canterbury, New Hampshire. The building serves as a school meeting place and is often a gallery for student art.

Burch Field, completed in October 2014, serves as a multi-purpose sports facility. This artificial turf field is used by Field Hockey, Women's Soccer, Football, Women's and Men's Lacrosse, and occasionally Men's Soccer. The facility includes bleachers, a press box, and lighting for contests that take place at night. Construction began when alumnus J. Christopher Burch ('72) made the largest single donation in the school's history in the spring of 2013.

The Memorial Gymnasium was built shortly after World War II to honor Tilton students who had served and died for their country. In 1998, the building was completely renovated and rededicated as the Memorial Athletic and Recreational Center (MARC). In the building is a memorial honoring Tilton students who have died in battle, dating back to the Civil War era. The memorial also displays Stephen Holden Doane's ('66) Medal of Honor, which was given to the school by his family. The building contains two basketball courts, a climbing wall, a weight room, six locker rooms, a training room, and a student center including a snack bar called Rusty's Den. A 2008 addition has extended the social area of the MARC, adding more couches, a larger television set, a pool table, and a foosball table. The previous wrestling room moved to the second story of the MARC.

The John F. MacMorran Field House, originally built in 1978, provided Tilton with its first indoor hockey arena. In 1999, Tilton completed a $2 million renovation of the facility.