The 2009 Ranger utility models have also received a big redesign. The Ranger 4x4, Ranger XP and Ranger HD (heavy duty) now ride on a redesigned chassis. The Ranger Crew and Ranger 6x6 will still be available in the old Ranger chassis.

The new Ranger is an excellent UTV for those looking for a good utility vehicle that is still sporty enough for recreation, even as a base for extreme racing builds. Where the old Ranger featured McPherson strut front suspension like the Sportsman quads, the new Ranger features dual A-arm adjustable front suspension. The rear suspension is independently adjustable and the HD model features self-leveling shock absorbers.

When we heard "self-leveling" we imagined air suspension with an onboard compressor, but that is not the case. The shocks are hydraulic units from Sachs and when you load the bed they self-adjust to bring the machine back level again. It takes just a few yards of driving for them to adjust. We are not smart enough to fully understand how these work but we saw them work with our own eyes. A very cool feature.

Not Much New in the Engine

Two engines are available in the new Ranger; a single cylinder EFI 500cc and a twin cylinder EFI 700cc. The engines are essentially the same as last years Ranger. Driving the '08 and '09 models back-to-back we didn’t notice much difference in performance between the new and old. The '09 may even be slightly slower. It would be really cool if Polaris put an 800 into the Ranger but it won't be happening for 2009. The improvement in ergonomics and styling on the new model is huge. The exterior styling is much better, with modern edgy lines and lots of front end protection. The front bumper has dedicated tie-down points and a massive tow hook. The front headlights are inset for protection from rocks and branches. There is also a nice storage compartment under the hood. And the 1,000lb capacity bed features multiple tie down points and is now tilt-able on all models.

The interior is also greatly improved. Seating is still a bench seat but is now contoured to hug the driver and passenger, giving more support to both. The steering wheel is adjustable with a tilt steering system. The dash panel is redesigned with a large glovebox and several open compartments that, according to Polaris, provide 46% more overall storage than the competition. The dash features an integrated digital/analog gauge, with open spaces for accessory switches. Polaris realizes that many side-by-side owners install accessories and they have made control installation as easy as possible. The panel can be accessed with the removal of two push pins and the under-hood compartment is tailored to make accessory hook-up to the battery easy.

The parking brake has been relocated so it can be applied from outside the vehicle if you forget to apply it before leaving the seat. And there are also cup holders for the driver and passenger. Looks Aren't Everything - How about Handling?

Okay so it looks good and has decent power, but what about the handling? Well it definitely handles much better than the previous Ranger. The handling of the old Ranger isn’t really that bad, but steering could be better. When cornering the old Ranger at full lock, the steering wheel would spin very fast as the wheels turn back to straight. To the point that you have to temporarily take your hands off the steering wheel. This handling characteristic has been greatly improved in the new model along with a new steering wheel. The steering wheel no longer feels like it belongs on a lawnmower. Although we were not able to drive the new Ranger HD the steering is probably even better on this model, as it has power steering. We were very impressed with the new Ranger models. The Ranger fits a good niche in the market for those looking for a sport utility machine. In our opinion it fits in the market slightly on the more utility side of the Kawasaki Teryx but much more recreation orientated than the industrial sidexsides from John Deere, BobCat, etc.

We were surprised to see the attention paid to the side-by-side models from Polaris for 2009. The Polaris launch was one of those rare occasions when it felt great to be wrong. Its great to see Polaris taking the UTV market so seriously. Hopefully it will prompt the last couple Japanese manufacturers to step up their participation in this fast growing market. Our Hypershift Clutch Kits are one of the most valuable products available when it comes to enhancing the performance of your ATV/UTV. Each kit is designed and rigorously tested by the staff @ Speedwerx to insure that it will increase your machine’s acceleration, back shift and all around performance. We offer kits for most applications. We have kits for stock machines, piped or slightly modified machines, stock machines with oversized tires, piped or slightly modified machines with oversized tires and kits for higher elevations as well. Most kits but not all include: primary spring, secondary spring, machined clutch weights and a compound radius helix. All of the proper ingredients to get your machine ahead of the competition and keep it there. Before ordering take a look at the application charts below to make sure you get the proper kit for your application. If you have a complete custom unit built for mudding, drags or whatever, let us know. Our clutching experts can help put a kit together for just about anything.

One of the most popular mods for ATVs today is larger tires. We here at Speedwerx & Hot Seat Performance are aware of this and understand why you want larger tires. But when installing larger tires 9 out of 10 times your machine will be slower and/or less responsive. The way to make up for this drastic loss in power and response is to change your clutching so it matches the tires you’re running. So if you’re planning on installing larger tires on your machine, DON’T FORGET TO CHANGE YOUR CLUTCHING! If you have any questions please call our tech line.

Speedwerx & Hot Seat Performance have a full line of big wheel clutch kits available for 27”and larger tire sizes. However, some units with 29” or larger tires may require additional changes. If you have 29” or larger tires on your machine, please let us know and we will match your tire size with your other mods and assemble a kit that will put a smile on your face!

The RZR has some great power but the stock clutching is in need of improvement. Our clutch kit adds very noticeable acceleration power to get you up to speed faster. This kit efficiently puts more of your horsepower to the wheels for better performance on hardpack, mud, or sand. When trail riding, its way quicker in tight twisty trails as the clutches upshift and backshift faster and smoother. This kit is a must have for all RZR's! Includes a set of magnetic adjustable Goldstar weights, primary and secondary springs, and a custom angle helix. We use our Goldstar weights because the profile is aggressive, has great throttle response, and you can add up to 22 grams for the ultimate in tuneability.

Plan on tuning your engine in stages? No problem, easily adjust these weights as you go. We will custom tune your kit for your machine and modifications. Please list all mods including tire size in the text field when ordering. 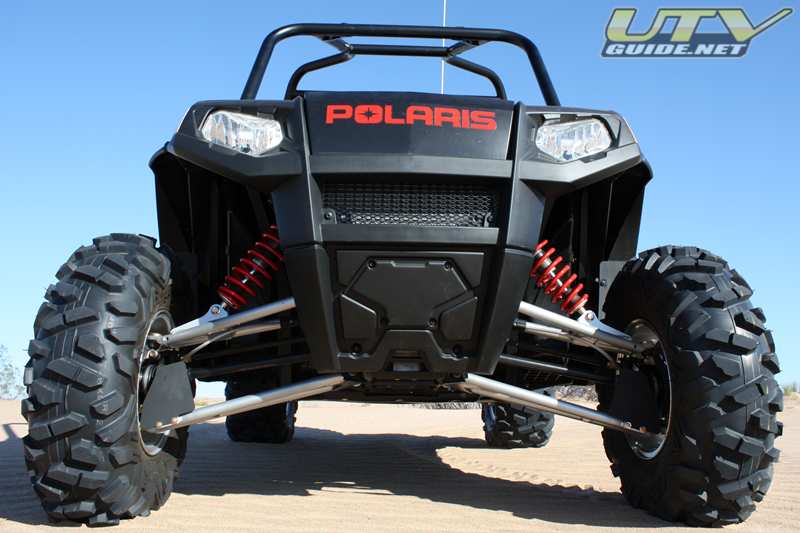 I had a chance to get my first seat time on a Polaris RZR S during the Sand Addiction Magazine Dune Tour at Gordons Well. The dune condition was incredible since it is early in the season, and we had some super strong Santa Ana winds earlier in the week. 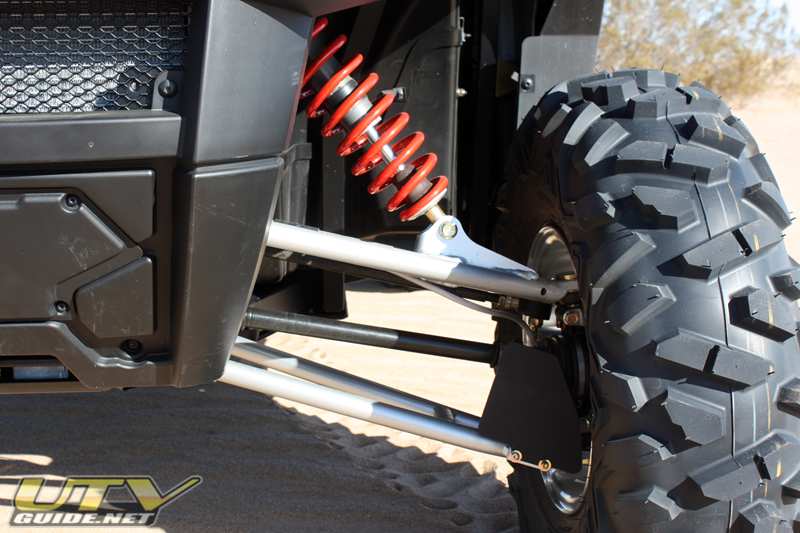 The Polaris RZR S comes from the factory with a +5″ long travel kit that makes it 60.5 inches wide (stock RZR is 50 inches wide). 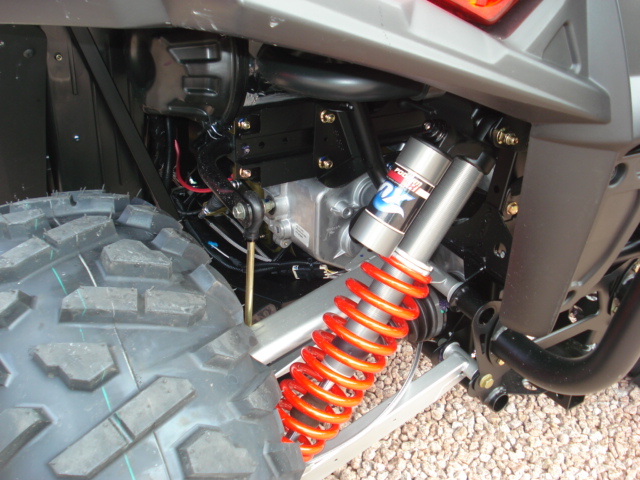 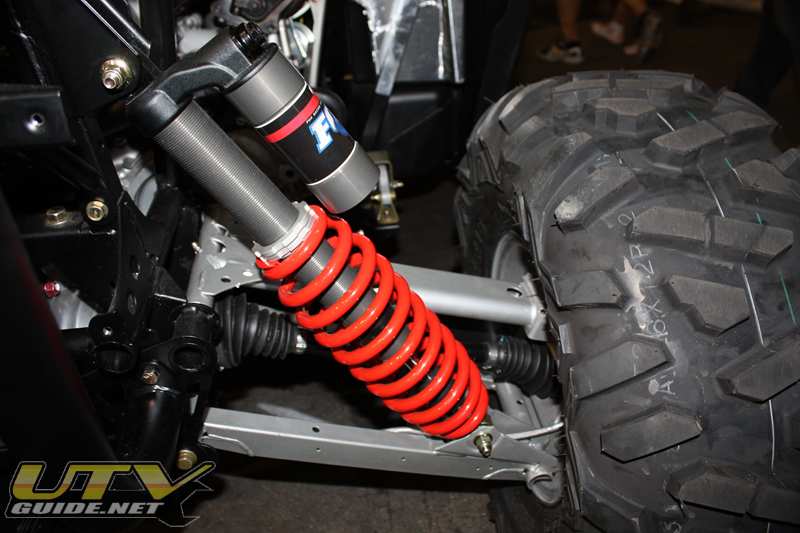 Heel pocket for more controlled operation of the gas pedal 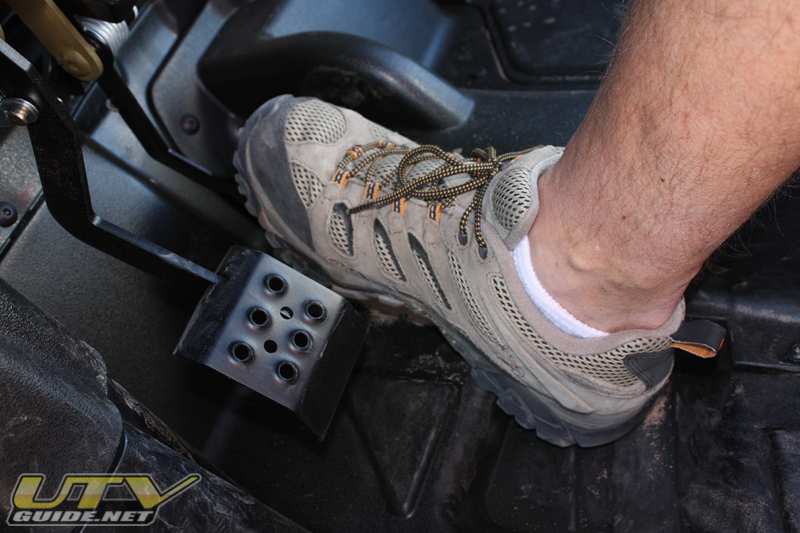 Additional clip to hold the end of the housing in place 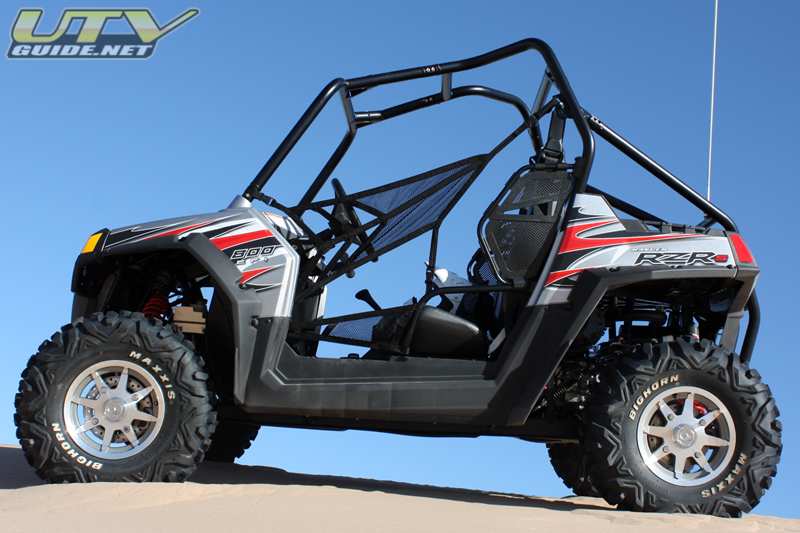 The Bighorn is not only a great tire choice, but the larger 26″ tire also helps move the RZR up off the ground for better ground clearance.

The exhaust sound on the RZR S is about the same as the RZR, but you can really tell that the new headers flow much better than the headers on a standard RZR. 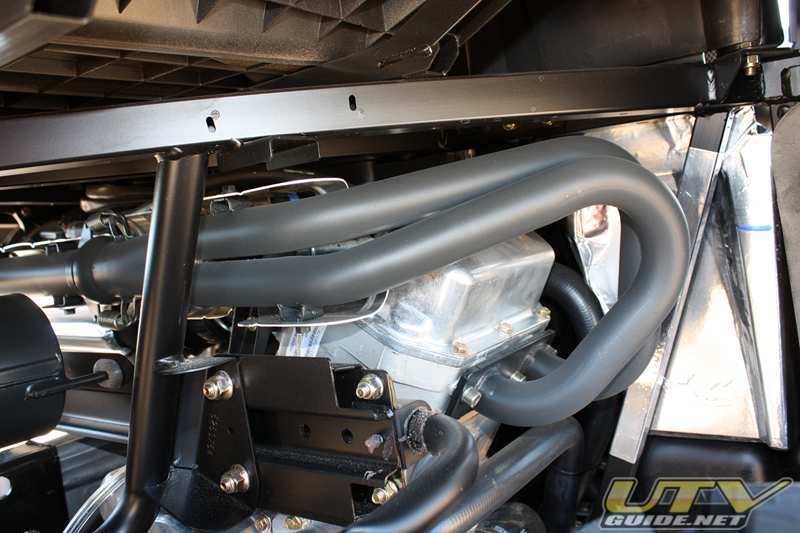 Performance headers flow much better than the normal RZR 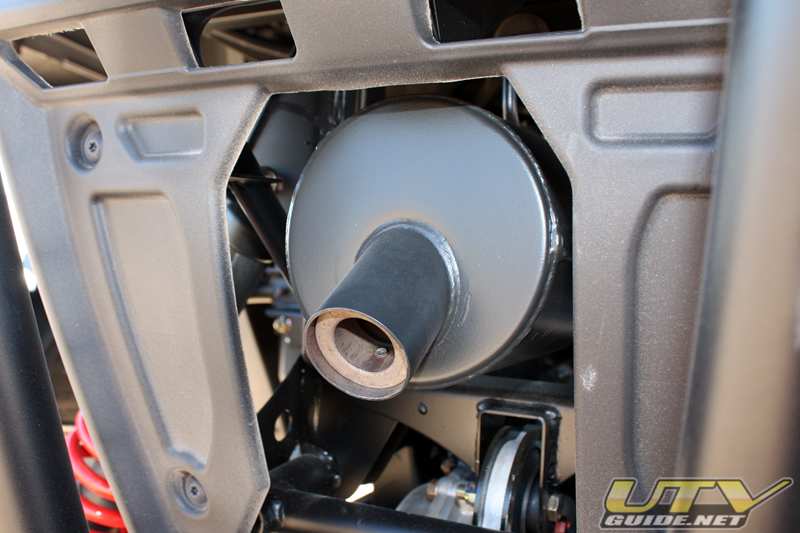 Exhaust tip now has a 45 degree turn down. 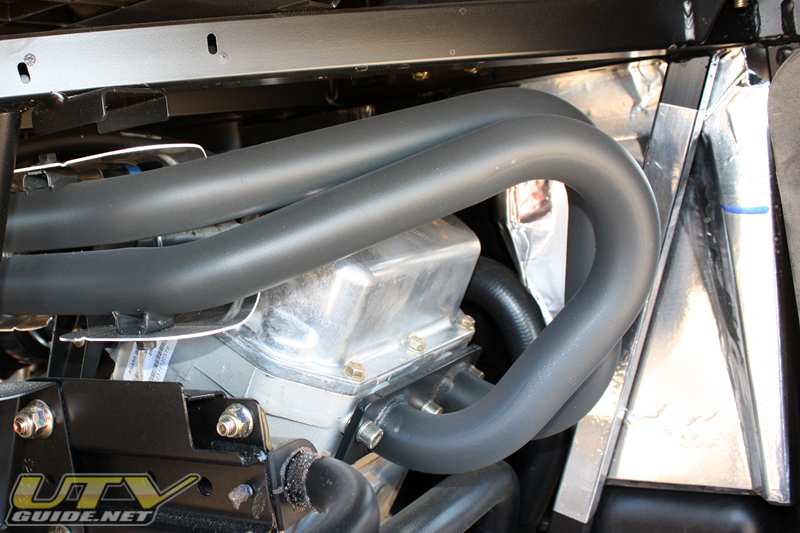 The RZR S has some new heat shield near the exhaust to keep the plastic from melting. 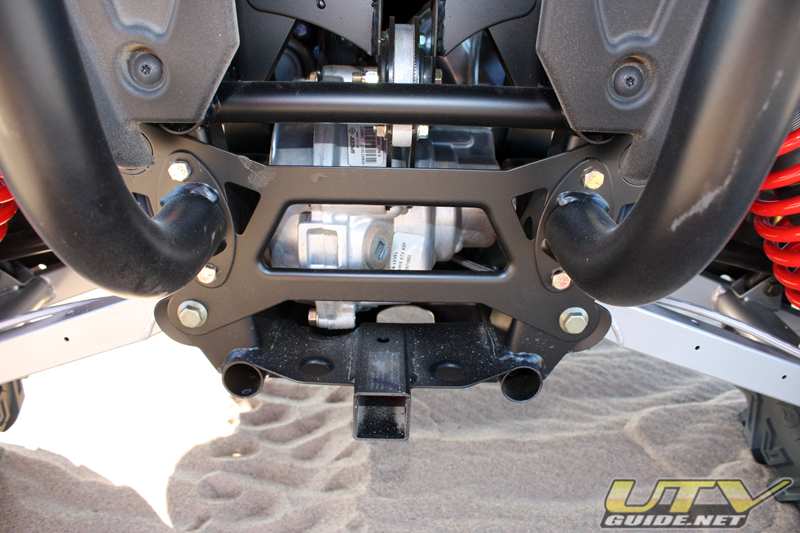 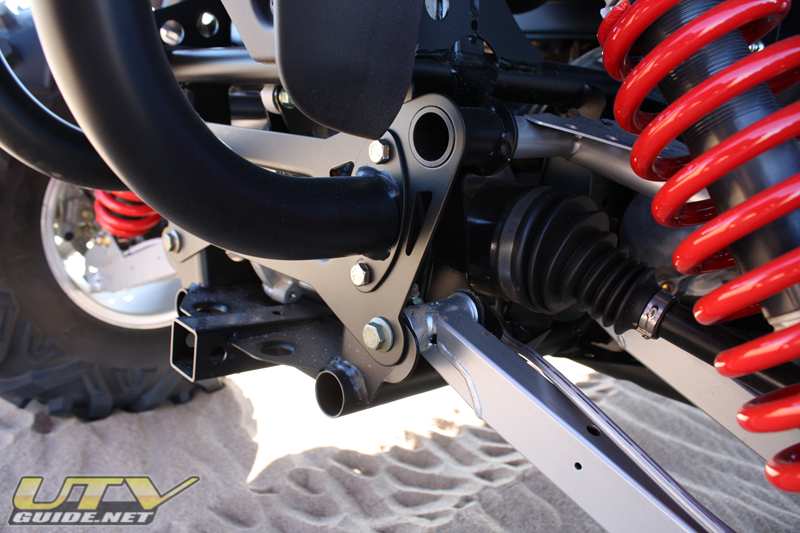 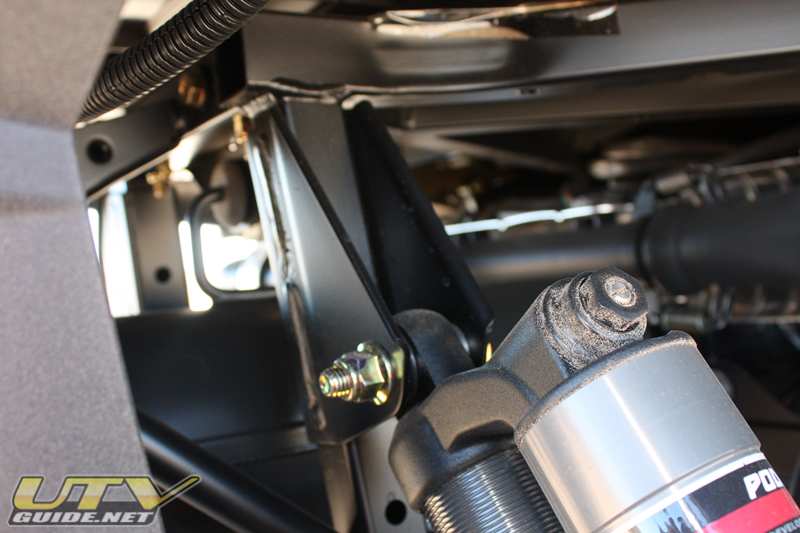 Upper shock mount has been strengthened 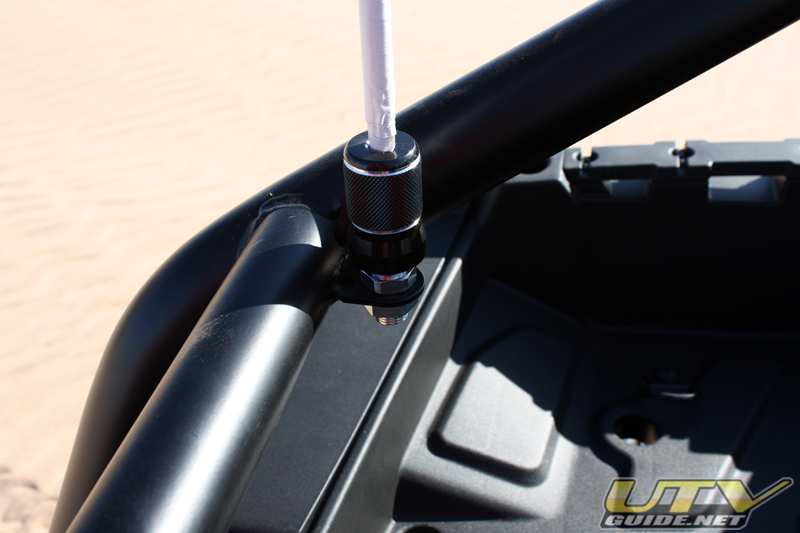 Rectifier has been moved up by radiator for improved cooling 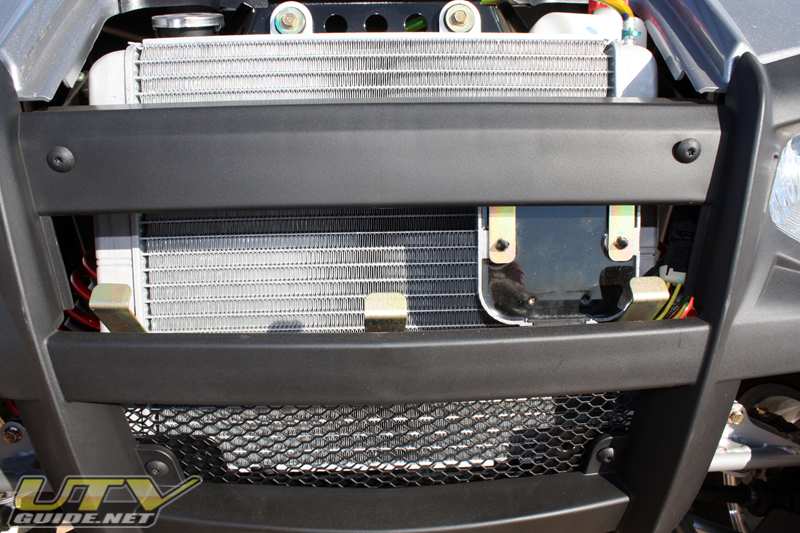 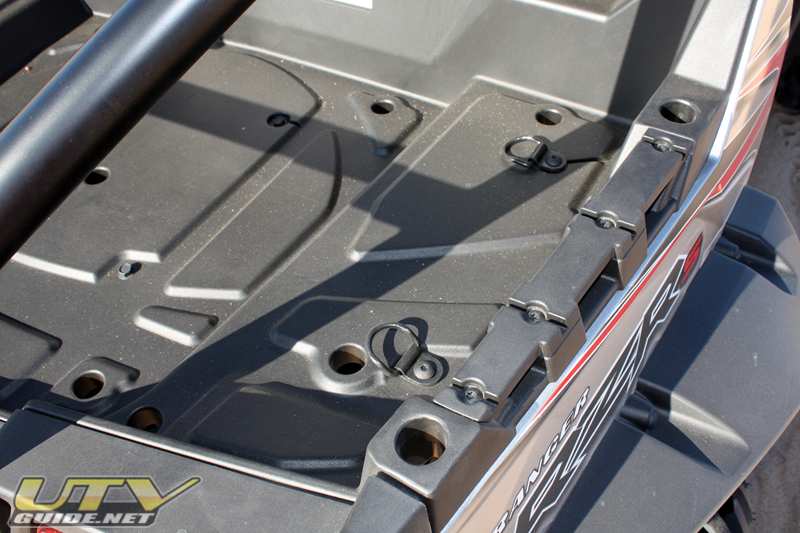 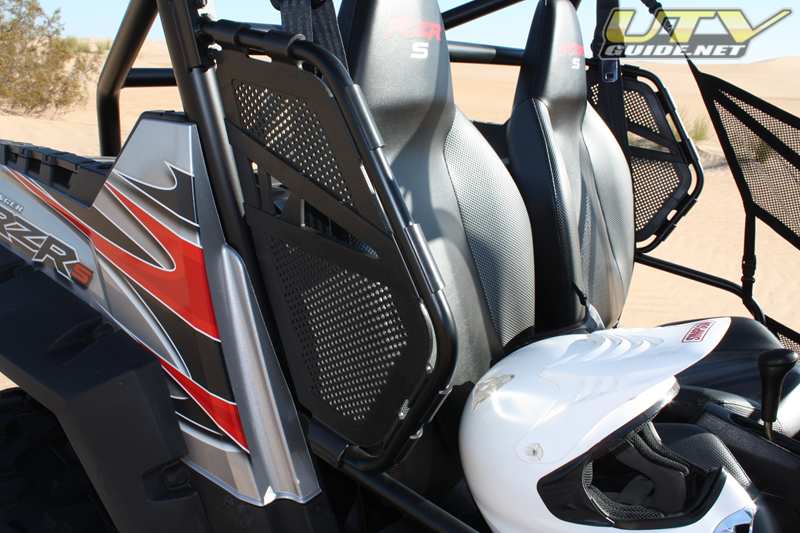 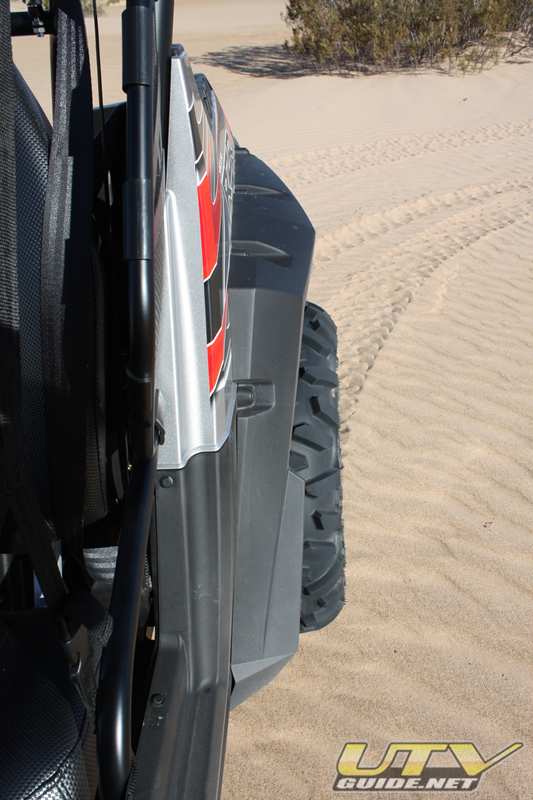 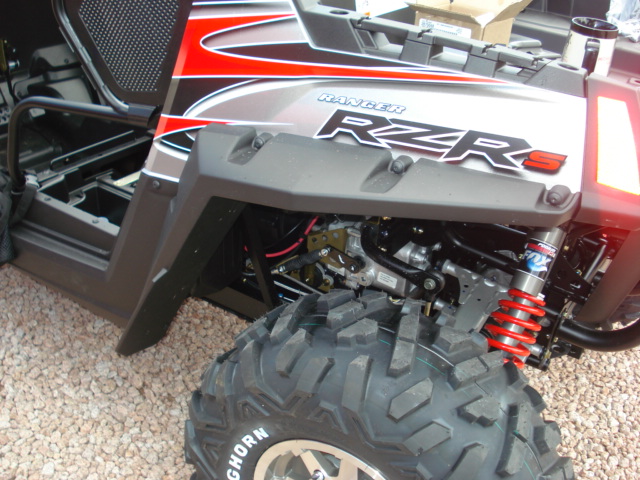 The wider stance of the RZR S adds quite a bit of stability for carving bowls or power sliding in the dunes.  And the combination of the long travel Fox shocks and wider a-arms make running over the whoops much more comfortable and safe as compared to a standard RZR.

The Fox Podium shocks do decent in average riding, but if you ride more aggressive, you will probably want to look into aftermarket shocks.

In completely stock for, and without even dropping air pressure in the 26″ Maxxis Bighorns, I was able to climb the hill at Patton Valley and Test Hill.  Both of these hills are the steepest that you will find in the south part of the Imperial Sand Dunes Recreation Area.

For pure hilling climbing in the dunes, the RZR S definitely has more power out of the box than the normal RZR and also more than the Yamaha Rhino or Kawasaki Teryx. 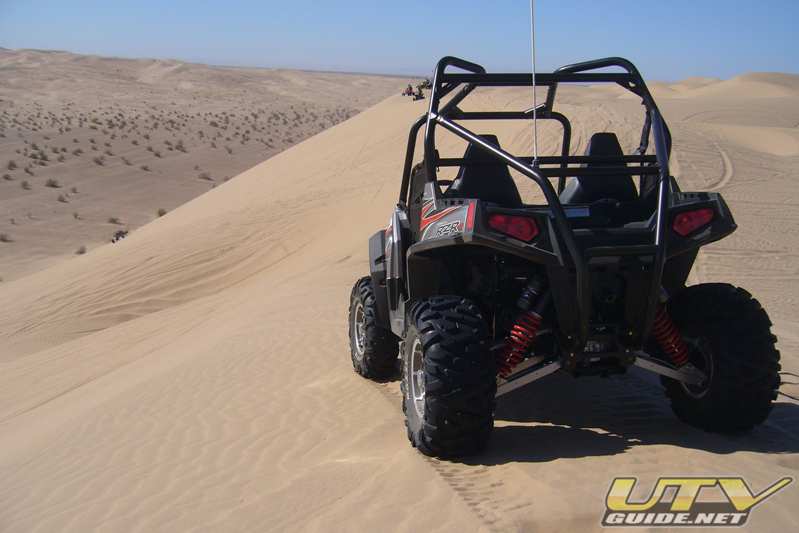 Our RZR S at the top of Patton Valley near Gordons Well, Imperial Sand Dunes 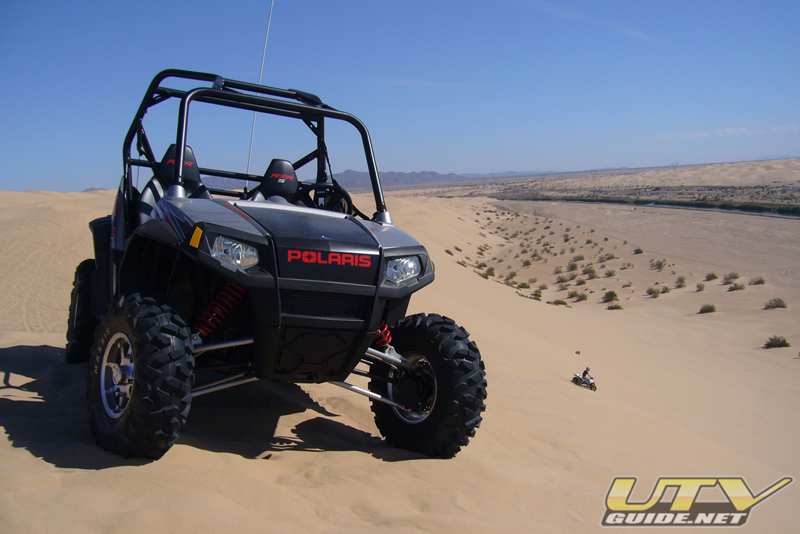 Our RZR S at the top of Test Hill near Gordons Well, Imperial Sand Dunes

I also did a few high speed runs down the drags at Gordons Well and was able to hit 51 mph on the GPS.  Very respectable top speed in the dunes.

Although the heel pocket did help throttle control at low speeds, I did not like it for full throttle situations.

I am not a fan at all of the RZR side nets.  They are cumbersome to use, they are too close to my left hand on the wheel and the upper snap is hard to latch.  The good news is they are easy enough to remove.

If you do remove them, you should look into a wrist restraint for your outside arm, and maybe a small door. 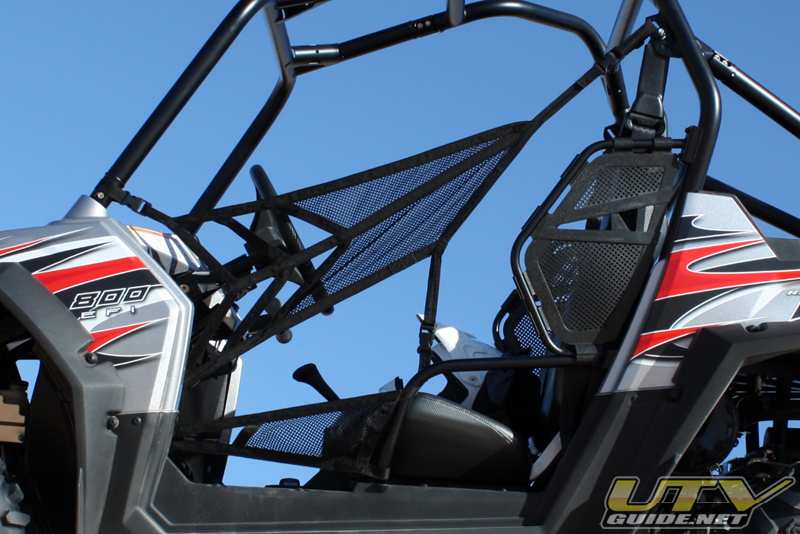 What would I change?

If I was going to buy a RZR S, I would make a just a few upgrades:

If I really wanted to do some hard dune riding, I would also get a set of paddle tires and smoothies and maybe look into an upgraded roll cage.

I have got to say without a doubt that the Polaris RZR S hits it out of the park.  Polaris made adjustments to fix some issues with the base 2008 RZR, then added a +5″ long travel kit that performs quite well right out of the box. If you are looking for a stock UTV that can really perform well in the dunes without much modification, then I would highly recommend looking at the Polaris RZR S.

With annual 2007 sales of $1.8 billion, Polaris designs, engineers, manufactures and markets all-terrain vehicles (ATVs), including the Polaris RANGER, snowmobiles and Victory motorcycles for recreational and utility use.